It was quiet in front of the imposing gate at the front of this ominous piece of 19th Century architecture. Its high stone walls and symbols from an ancient people stood like a secret hushed in the close, warm summer evening air. I put the key in the lock and turned and was almost surprised when it clicked open. I shouldn’t have been, yet it felt forbidden, like I was intruding. But my cousin had asked for this key from the proper authorities, and then she had given it to me because I would be in Nijmegen first. It was okay. We were designated survivors.

I stepped quietly through the opened gate, and carefully locked it behind me. I needed to see this, to find him, but I didn’t want to disturb anyone, especially the dead. I moved into the entrance area and could see the graves just beyond. What is the correct way to proceed, I wondered. To my left I found a listing of the graves. He was there, but listed incorrectly as Elias-Schaap, Emanuel. Elias was his middle name, his father’s first name. It should have read Schaap, Emanuel Elias.

There was also a grave number, but where was it counted from? The front or the back? The left or the right? I’d never been in a Jewish cemetery before. Were the religious customs very strict? Should I be wearing a kippah? Should I wash my hands with the silver cup left there? I started to venture into the graveyard to begin my search, when the door to the side building opened.

“Can I help you?” a grey-haired, middle-aged woman asked. I gave my story. I had a key from my cousin as we were the great-grandchildren of Emanuel Schaap, buried in this Jewish cemetery in the fall of 1916. I had come from Canada on a visit to my grandmother’s old neighborhood on the nearby Groesbeekseweg, had realized the cemetery was very close, and I would like to have a look.

“Ah yes! Glad to help you. So you have nothing to do with that white van that was parked out front? We have to be somewhat careful these days.” I asked if I needed a kippah, and she told me they were fairly relaxed about those things, but if I really wanted one, they had lots in a room whose door was beside the grave registry listing. I picked out a blue one from the pile and put it on somewhat awkwardly. It was a bit small for my large head, and considering I’d never worn one…

Keren was the teacher of the children’s school associated with the Nijmegen Jewish community and had a small classroom at this site.

“So! Row 6, grave 12. They are counted from the back and the left,” she stated as we walked to the end of the graveyard. “Some of the older ones can be hard to read.” Yet quickly enough we found the grave and, although weathered greatly by time, the writing and his name were quite legible. The first part was all in Hebrew, but beneath was stated:

Here rests
Emanuel Elais Schaap
in life an agent for the railway (H.Ij.S.M.)
Passed away on 18 November 1916

I was surprised how emotional it felt to actually stand at Emanuel’s grave. All of this family history, and so much of it well hidden. I thought of his widow, Vrouwtje or Flora, as she liked to be called, and his children: son Maurits, along with daughters, Klara (my oma), and Regina and Sofie. At one time or another, they probably have all stood here, the exact place where I was now standing. But so much happened after his death. So much was darkened, especially by the evil of the war years and the Nazi occupation of the Netherlands.

I told Keren the details of the story. The ones that my cousin and I had pieced together over the last years since my mother passed away. That my grandmother, living in this quiet Dutch neighborhood through the Nazi occupation had somehow kept her Jewish roots a secret…that the family, including my mother and the parents of my cousins had all continued to live with this secret for the last 70 years, unbeknownst to our generation until my cousin, Claire, and I found incontrovertible evidence through genealogical research and the help of Holocaust websites that Oma’s family was indeed Jewish.

Emanuel had been the stationmaster of Nijmegen, a city in the eastern Netherlands close to the German border, at the turn of the last century. He raised his family there, and a generation later, Oma raised her family there. Oma was quite proud of her father. A picture of him in his railway agent uniform had been proudly displayed right until the end of her days in a nursing home. I wonder how she managed to avoid talking about his religion, hiding it from all discussion, especially in the war years. I puzzle over how the authorities never discovered her heritage, even if there was some tampering with the population register to remove the religious affiliation beside the family name. Wouldn’t some past friend or acquaintance have turned her in, or even simply said the wrong thing at the wrong time with the wrong person listening? The tight-lipped nature of my oma’s family lasted long after the war.

E.E. Schaap, my great-grandfather (my maternal grandmother’s father), fourth man (seated) from the left as a member of the Jewish board of Nijmegen (May 1, 1913)

A couple of years ago in my explorations, I had found a picture of Emanuel as a member of the board of the Jewish community of Nijmegen taken a few years before he died. Apparently, he was involved in building what was then a new synagogue on Gerard Noodstraat. Abandoned by the decimated Jewish community at the end of the war, my sister, cousin and I visited this synagogue in 2015 when it housed a natural history museum. 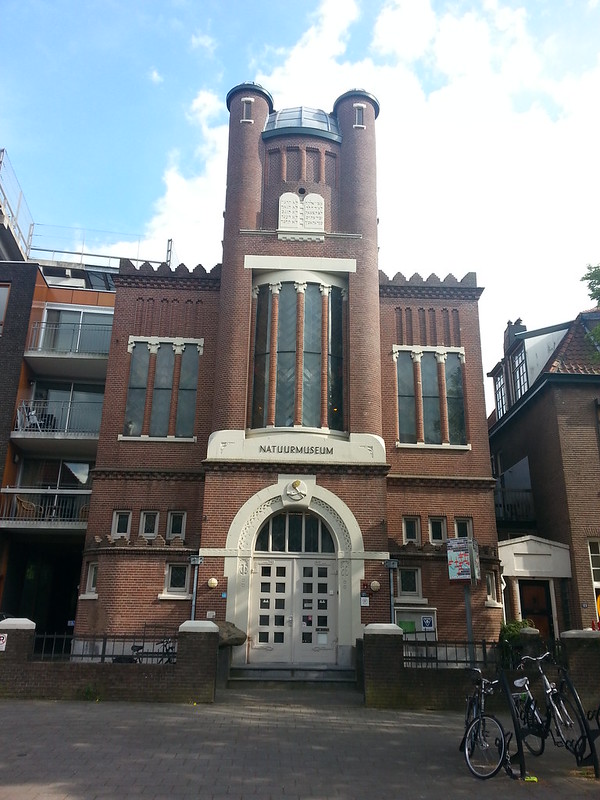 Oma and Opa (as her boyfriend) in 1916; possibly in mourning for her father’s death

Emanuel died fairly young, at the age of 59 when Oma was a tender 17. As I related in an earlier post, Emanuel’s family did not fare well during the German occupation. Emanuel’s widow, Vrouwtje (Flora) Schaap Calo, moved to Amsterdam in the 1920s and was taken from her seniors pension to die in Auschwitz in February 1943, days before her 79th birthday. His son, Maurits with his wife Rachel and their three sons moved from Kleve, Germany, to Amsterdam once Hitler rose to power. They were sent to the transit camp of Westerbork in the spring 1943 and then were gassed in Sobibor on April 16. Maurits’ youngest son, Alfred, died in Auschwitz in September 1942 at the age of 18, probably having been deported in the mid-summer wave of deportations that had swept up many young people in Amsterdam. The Nazis started with the young and healthy first of all, under the auspices of work camps for youth. Maurits’ two elder sons, went into hiding. The Dutch use the expression onderduikers (under-divers). They managed to survive the war. Two of Emanuel’s daughters, Regina and Sofie, were married and living in Indonesia. They had the Japanese occupation to deal with but managed to survive.

My Oma, Klara Alberts Schaap, lived out the war with her two daughters, my mom, Clara, and her sister, Willy, under the noses of the German occupiers. Hiding in plain sight, but under a constant pall of fear.

But my generation never knew these details. Until recently. All of it was kept secret, except for the occasional hint about “distant Jewish relations probably having died in the Holocaust”. And to think this cemetery was no more than a 15 minute walk from Oma’s house on Groesbeekseweg! Perhaps that was a reason why she and Opa bought into that neighborhood in 1936, twenty years after Emanuel’s death. Yet, due to the long-practiced secrecy, none of my cousins were taken to visit this cemetery, even though we all visited Oma’s house countless times through the 1960s and 70s.

If I needed further confirmation about my family’s Jewish roots, it came back with my Ancestry DNA test results this year, which showed I am about one quarter European Jewish—a number that makes pretty good sense when one of your four grandparents was Jewish…and lived in Europe.

Keren was amazed at the story, even though it is similar to many she has heard before. It seems more and more people of my generation are finding out about mysterious branches of the family tree that were never really talked about after having been cut down in the 1940s. She took down my contact information and welcomed me to come back any time. Northern Europe was having an unusually hot, arid summer, and she kindly offered me a glass of water from her classroom.

So here I was thousands of miles from home, more than a century after Emanuel’s grave was dug, and with all that intervening history, standing with tears in my eyes and a kippah on my head, the cemetery grass dry and prickly at my feet. After seeing all sorts of family tree information online, Holocaust memorial listings of their names, and my own DNA results, nothing brought it home to hard reality as standing at the Jewish grave of my great grandfather, knowing I was literally standing in the footsteps of his family, of whom I am one of the survivors. One of the few survivors.

Ian at the grave of E.E. Schaap, Kwakkenberg, Nijmegen

My mom never came out and made the Jewish past of our family clear and plain to me, which is not surprising when she must have been taught from an early age how deadly and dangerous the truth could be. Old habits die hard. Very hard. As children, my cousins and I were shielded from the facts of our family history. In the back of our parents’ minds was the possibility that a time may come yet again when railway cars would be used to carry people to camps from which there was no return. And yet, I think there were times when she left clues, perhaps leaving it up to fate as to whether we would discover the whole story. Perhaps there was even part of her that wanted us to know. Perhaps to know without knowing, without being implicated in the tragedy. She did of course give me the line about “some of our distant relations may have been Jewish and may have died in the Holocaust.” It just took me over twenty odd years to remove the italic emphases from her statement.

One other subtle clue exists on the back of a photograph taken of her in the late 1940s after the war. The back of the photo is simply labelled “Kwakkenberg, Jan 1948”. The expression on her face looks secretive, maybe even one of subterfuge. Perhaps she is just glancing away from the winter sunset. The Jewish cemetery faces west on Kwakkenberg street in Nijmegen.

Let me know what you think Cancel reply